Ladakh is based in tibetan buddhism in regard of religion. Attractions for visitors are first the monasteries, which are usually located pittoresquely on a hill or at another especially beautiful place. Also there is the traditional medicine of the Amchis and the "life-advise" of the oracles as foundation of the buddhist teachings.

Many other cultural aspects like wedding-ceremonies, rituals for the dead and other traditions are more related to the cultures west of Ladakh. Also the influence of Bon-religion you can find in several aspects of daily-life. You will get to know some of these things automatically while travelling through the country and talking to guides and locals (the guide is often the translater as there are many Ladakhis not speaking english).

Traces of age-old cultures of about 3. - 5.000 years ago you can find on several rocks. Ladakh is a widely non-explored treasure-trove of countless petroglyphs.   Another possibility getting to know more about the daily life of the Ladakhis are the visits of schools and NGOs (for example the Women's Alliance, dthe ecological centre (Ledeg), the Snowleopard Conservancy and Himalayan Homestays).

More sightseeings are next to the not mentioned attractions in the capital Leh are the king's palace in Shey, the museum in Stok and the main settlement of the tibetans: Choglamsar. 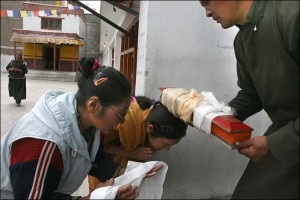 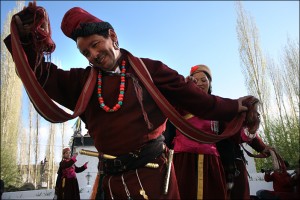 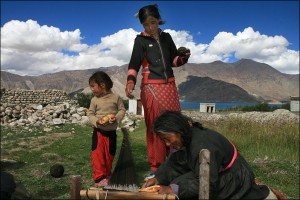 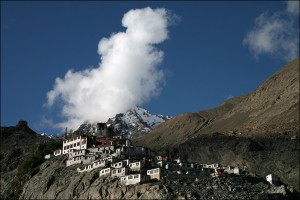 In Ladakh every place is belonging to a monastery. There are more than 400 monasteries in Ladakh (some are quite small branches of the 13 main monasteries), which are nearly all inhabited by monks. The number of monks are more than 3000, the nuns are approx. 500. The monasteries belong to different buddhist sects, the yellow hats (Gelugpa-Order) is the most widespread. Some monasteries are located on the described Trekking-Routes, some are reachable by taxi on the road and others more difficult or hardly accessable.

We can arrange visits at all current monasteries. It is also possible to have combination-tours with several monasteries on one day. With a monastery-guide (who also can translate your questions to the monks and nuns) you get to know a lot more then you can read in the guide-books. Also we arrange the visit of a Puja (collective prayer) in case you don't want to be dependend on chance. If you get the pleasure of watching the making of a sandmandala, is depending on big luck. The monasteries don't do them on special times and don't give announcements.

Several monasteries are hosts of monastery-festivals with mask dances - many times in the winter. The appropriate dates are listed with the monsatery-descriptions. 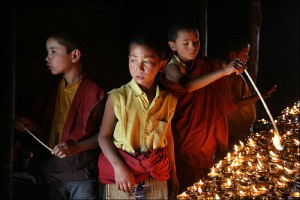 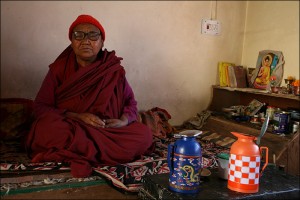 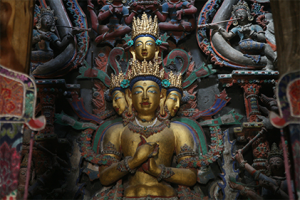 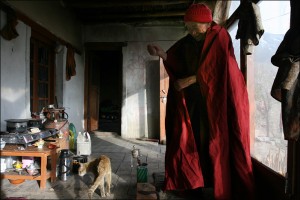 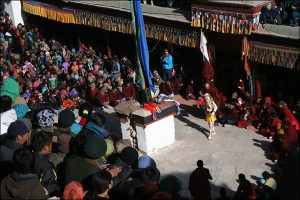 In Leh and nearby there are some female oracles, who welcome travellers, too. They are women, who can put themselves into trance and a deity gets possession of them. In this condition the oracle is able to give answers to questions of decisions and heal illnesses. It goes like that: a number of people get together in a small room and communicate one after the other with the oracle. Everyone can ask a question or request a healing.

For our western mind it is a contradictory issue and I have seen quite some confused people afterwards. If you want to ask a question, you have to expect that the answer is maybe not to your liking. Therefore you have to take care especially with questions which are meaningful to you, that you can deal with every possible answer. Even if you don't believe in oracles, the encounter is impressive and the belief can stagger.

If you want to avoid this, you can also heal an illness. For sure you cannot expect miracles, sometimes people didn't notice any effect. Others could report some real betterment. Negative outcome we never heard of - so it seems not really risky. The healing happens as follows: either the oracle sucks with her mouth or with the help of a small tube on one or two spots on the body and spits afterwards strange lumps and slime. For other type of illnesses she strikes with a sword, which was hold over a fire, over her tongue and blows over the sick spots.

The deity out of the oracle neither speaks german nor english, sometimes not even ladakhi. Therefore you have to have a translater for this arrangement. 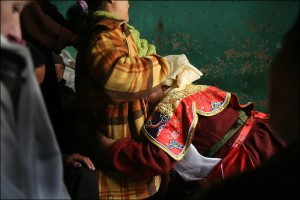 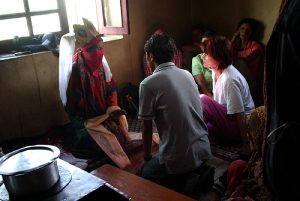 An Amchi is a doctor, who diagnoses and treats after the traditional tibetan medicine teaching. The diagnose is carried out by feeling the pulses and asking questions, the "medicine" are herbal pills, which taste awful, but haven incredible positive effect. For doubters: nobody became worse after taking herbal pills. The diagnose is quite often astounding as the condition of the body is just taken by feeling the pulses and the doctors couldn't have known otherwise. Some  Amchis are also experienced with accupuncture. We also recommend a visit if you are not sick in the moment, but to have a general health check-up. In Leh there is a very good english-speaking tibetan Amchi, but nearly in every village there is an active one.

Petroglyphs are rock-pictures worked into stone from prehistoric time. In Ladakh there are more to find as you might think. Until now there is just a "Rock Art Areal" in Dhomkar in the Dah Hanu area easy accessable, so that on a walking-path you can see easily many petroglyphs. Most of the other rocks are single or in bigger groups scattered around on unmarked spots, which you have to discover yourself.

For these discovery-tours you need next to sharp eyes good shoes and sure-footedness as you have to climb a little bit. But especially this form of own discovery makes the charm of including the petroglyphs into the itinerary. Until now science and registration of the finding spots are just at the beginning.

Some petroglyphs are considered to be 3. - 5.000 years old. They contain mostly animal and figure displays. There are also lots of rock-paintings of newer date, younger than 2.500 years with stupas and other buddhist symbols on them. There are also quite some rocks with a mix of these two types.

Next to the area in Dhomkar there are locations with some petroglyphs of old-age in Alchi, Sabu, nearby Indus in the Rong-area and in Nubra-Valley (nearby Panamik) good accessible.

Our knowledge is in our infancy, too - but we can guide you easily to the finding spots we have discovered already. And for sure we enlarge our knowledge continously - as we know that there are still so many petroglyphs in Ladakh to be discovered. It is very likely that in Ladakh the biggest concentration of petroglyphs exists within India - maybe even worldwide. 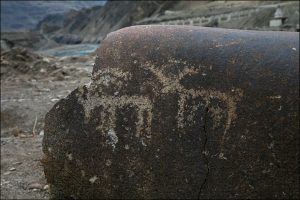 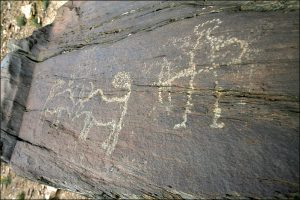 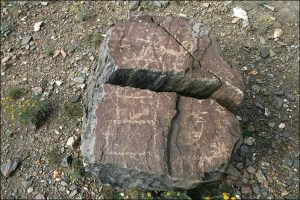 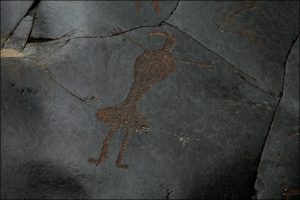 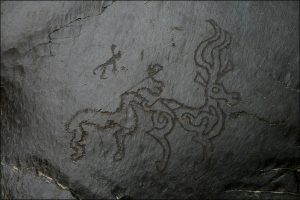 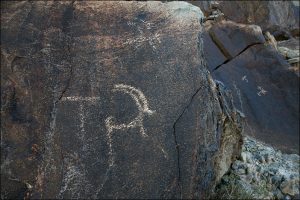 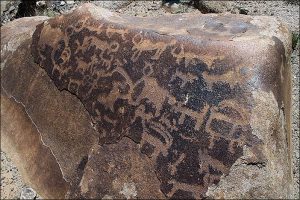 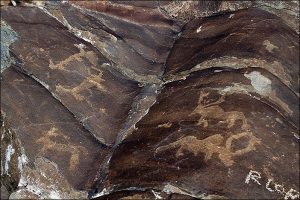 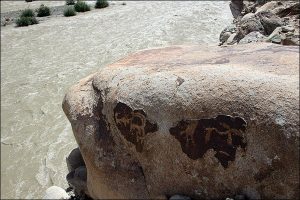 There are numerous NGOs, Projects and Inititatives in Ladakh and Zanskar, which you can visit and have a talk with the staff. Some are easy to just come along, for others it is better to have an appointment, especially when you are travelling in a (small) group or you want to be sure that someone who is good in english is available for sure. Most of them have their office in Leh.

The better known in Leh are:

At the Womens Alliance in the season you can daily view the movie "Ancient Futures" from Helena Norberg-Hodge. The Tibetan Heritage Fund takes care of the restauration of the Old town in Leh and offers very interesting guided walks in the season. The Ladakh Hilfe works together with the local REWA-Organisation with disabled people. 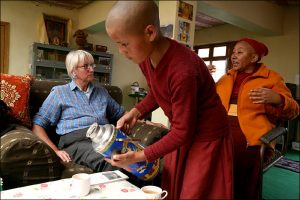 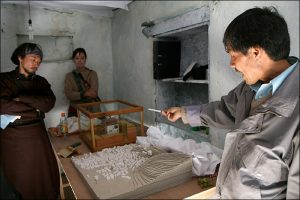 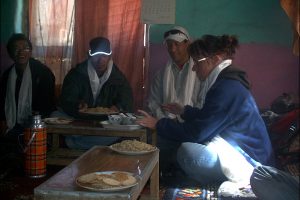 In India all children have to go to school. India takes care for a sufficient number of gouvernment-schools with well paid teachers. Unfortunatly they are not controlled according to their attendance nor their quality. Especially in Ladakh the situation developed not satisfactorily. Out of the nowhere grew instead in many places private schools, mostly sponsored with money from the western countries. These offer better qualified lessons.

In any case it is interesting to have a look into a school and talk with the teachers. Also the morning-assembly with singing of the national anthem and praying together is quite different from the schools in the west. The children wear school-uniforms and have to memorise a lot. They start going to school quite often at the age of 4, first attending the "Lower Kindergarden" with singing a lot and shouting the alphabet.

Ladakh belongs to the state J&K, having the official language Urdu, which is also taught in the schools. Later english is added. In the private schools children learn the local script Bodhic and sometimes Hindi, means that they all grow up moreorless trilingual.

You can visit the schools spontaneous or fix a visit in your itinerary. Unfortunatly the 2-weeks-summerholidays are announced usually just shortly before so that it can happen that you are finding yourself on an empty schoolyard. Nevertheless it is interesting to opt for a school-visit if you want to have a better insight into Ladakh.

How is very involved in that topic, has to pay a visit to SECMOL, where you can find enthusiastic people to talk to. SECMOL is an NGO founded by a Ladakh, who is - next to other activities - more engaged in the betterment of gouvernment schools then the bigger spreading of private schools.

And else there is...

Palace of Shey
16 km away from Leh are the ruins of the old kings-palace of Shey, a building, which has been ever just a side-residency for the royal family in Leh. The outer walls are in good shape, in the inner part there is nothing to see which makes you imagine the historical life of the ancient royal families. But from the balcony you can have a great view over the Indus-Valley. Who climbs higher can have even better views. In one room you can see a hugh Buddha-statue. You can either drive directly to the palace or arrive by a 1-hour-walk through the fields from thikse. Nearby the palace is a group of tchorten from 8th to 10th century.

Museum in Stok
14 km away from Leh is Stok. Here is the residency of the present royal family. In some of their rooms in the palace they have established a museum with mostly items from historical times, possessions of the royal family as well as some 500 year old Thankas. On top of that there is a "magic sword" - formerly the oracle of Stok made a knot in the blade by magic.

Choglamsar
If you are interested in the situation of the tibetan refugees, you have to visit Choglamsar. Here is the biggest community in exile in Ladakh. The SOS childrens village in the tibetan part (the second biggest in India) is open for visitors. With the help of donations (many from Germany) lots of houses for orphans with individual care could be built. The associated school is also open for other (tibetan) children. In the breaks there is a lot going on in the schoolyard.

Also in Choglamsar there is the Mahabodi-Centre. A monk (Bhikkhu Sanghasena) errected a big centre on this huge area with lots of institutions: a school with hostel, a home for old-aged people without family-members, a hospital, a nunnery etc. The centre is financed by donations. Visitors are welcome and will be taken around after being registered in the office. Next to the tours, the centre also offers mediation-courses. In the branch in Chanspa in the summer-season there are daily introductions into buddhism and meditation. Other events you have to ask on the spot. 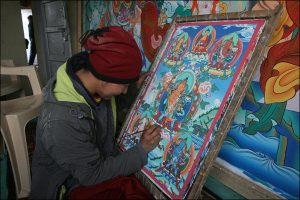 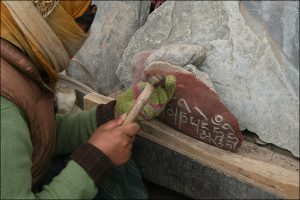 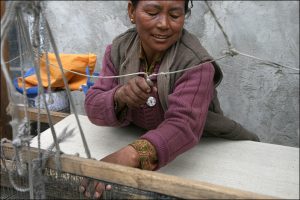 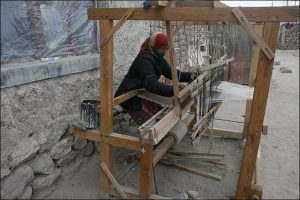 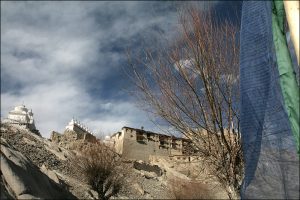 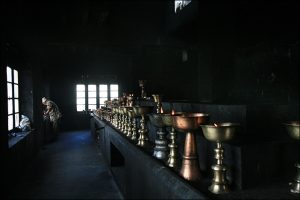 Sorry, in german language only