Nepal is the first destination outside India that we have included in our offer. If you love the Himalayas, there is no getting around this relatively small country with the highest mountains and friendly people.

Nepal, located between Tibet and India, is 885 km long and 240 km wide. However, it is going up powerfully (up to 8.848 m) and down (down to 70 m). 8 of the 14 eightthousands are in Nepal and make out its most special scenic appeal. Nowhere else one can approach these mighty giants so easily.  .

Nepal is ordered in three regions. The whole southern part is in the plains. Here lives half of the nepalese population as it has fertile land, is the whole year without frost and offers enough water for agriculture. Also here are the only places with industry (except Kathmandu-area). North of it is the middleland with altitudes of 3.000 m all across the country. Here is the capital Kathmandu with the neighbouring old royal cities Patan (Lalitpur) and Bhaktapur same as the touristic centre Pokhara. But building and keeping the roads is difficult here, which means that the infrastructure is not well developed. But Nepal tries to get more villages connected by roads. Along the northern frontier are the high mountains. The southern side has to fight with heavy monsoons whereas some of the northern parts suffer from dryness. Agriculture and husbandry is difficult so that food has to be imported. But here, or better said in some of these areas tourism is flourishing. Method of getting somewhere is mostly the feet.

The variety of different groups of people in Nepal is huge! More than 100 different ethnic groups live together. Their common language is Nepali – very much related to hindi. During a travel one gets to know easily people from different backgrounds. Most of them (85%) live on the countryside although one can observe quite some migration to the cities.

Since 2008 Nepal is a secular republic, the king just has representative duties. Before that the history was quite turbulent with the strengthening of the maoists, a kingsmassacre 2001, civil war, state of emergency etc. 2015 the country was divided into 7 provinces/states. Nepal continues to have problems (caste system, it belongs to the poorest countries worldwide, insufficient infrastructure, illiteracy etc.), but gtravellers are mostly charmed by the friendliness and hospitality of the Nepalese and usually find and exciting travel-destination.

Below we briefly present some topics that may be of interest for a stay in Nepal. We will be happy to provide you with further information – after all, our colleague lives on site in Kathmandu and is always up to date!

Mostly known are for sure the countless lodges and guesthouses, which serve as a comfortably accommodation during a trek. Singles up to dormitories and a cosy guestroom are there as basic equipment, sometimes one even can get the luxury of a hot solar shower. Some are in long existing family houses, which are done up for the guests, others are newly built. Here is most of the social trekking life – contacts are easily done. Also there are guesthouses in Nepal, which belong to buddhist monasteries. For sure you also find in Nepal the worldwide common guesthouses, hotels and few 5-star-houses in Kathmandu and Pokhara. Please tell us your dream-criteria and we find the suitable accommodations for you!

Apart from the below mentioned main focus of religion, Nepal offers more cultural delights. The architecture of the old kingstowns (Kathmandu, Patan and Bhaktapur) is worth to see, history can be easily felt here. The everyday culture can be easily get to know with visits at families. On the culinary part, the “national dish” Dal Bhat (rice with lentils and vegetable) doesn’t sound exciting, but each ingredients and spices helps to make it a varied delicacy. And on top of that there are much more tasty dishes! What about learning them in a cooking class? The gouvernmental school system is not very good and so there are many private schools, mostly founded by western support. Who can afford, sends their children even to indian boarding schools. Maybe a school visit suits into your itinerary? Then you can check by yourself the circumstances.

Due to the many ethnic groups, there is also a diversity of everyday culture – a great source for many discoveries.

Nepal is THE Trekkingparadise! Different areas (Everest, Annapurna, Dolpo, Mustang, Manaslu, Langtang etc.) grant an incredible diversity of trails, landscapes, passes, vegetations. Due to bad roads countless trails were created, which are often walked by locals. Goods are transported in many areas on people’s backs. From daytreks to more than 3-weeks-treks something is offered for every taste, shape, focused topics. Some treks can be done as lodge-treks with guide and porter, for others you have to use luggage-animals and tents. In some areas are lots of people walking son that they are a little overcrowded and in others you hardly meet another tourist. One thing all of the treks have in common: the landscape-experience is just awsome!

Did you hear about a trek which interets you? One with varieties? Or are you just overwhelmed by the huge possibilities? We talk with you about which well suit best for you! We can arrange all lengths in all areas. 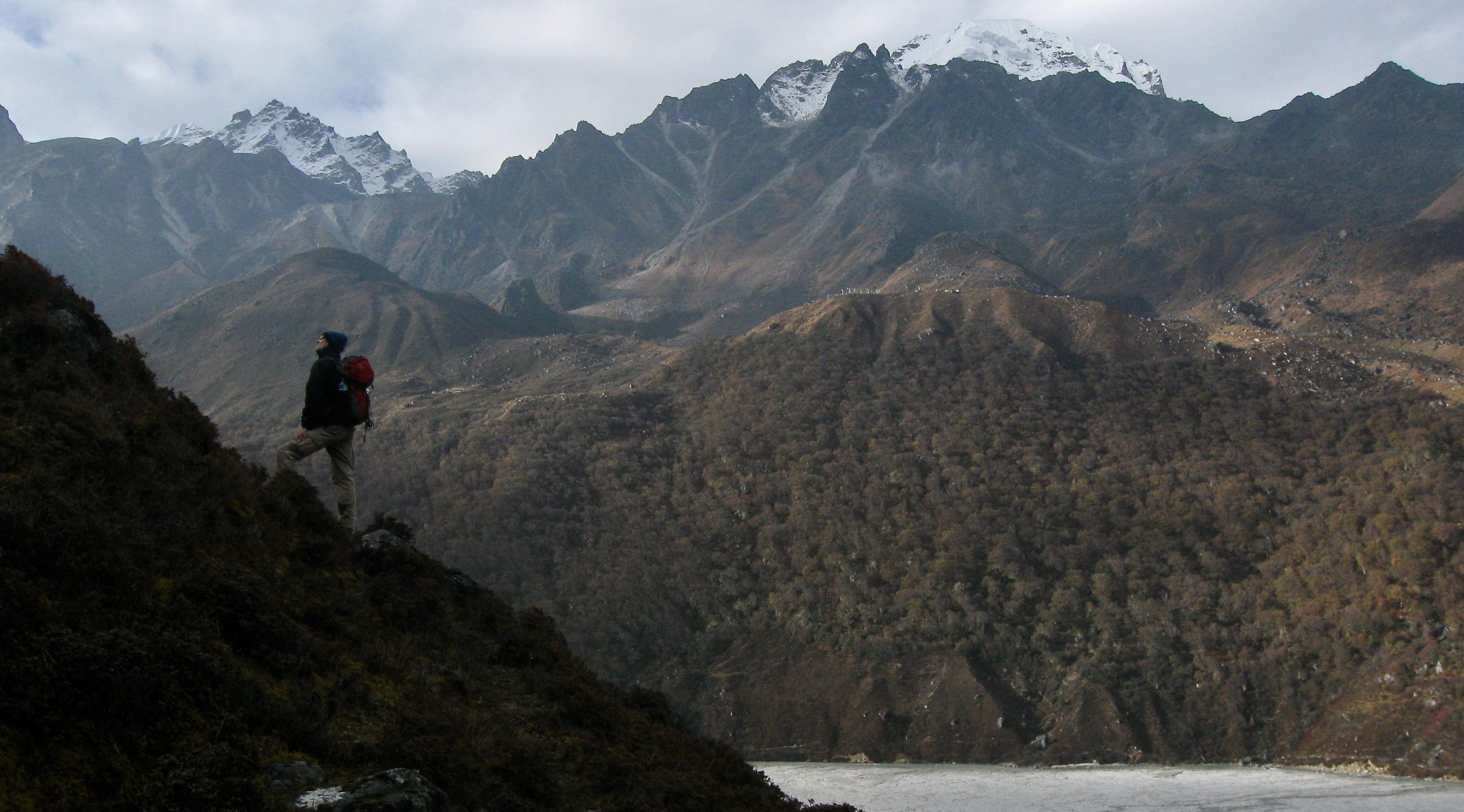 Flourishing in a peaceful coexistence, Hinduism (ca. 80%) and Buddhism (ca. 10% – but more in the for tourists interesting areas) Nepal offers a great variety of religious characterised festivities and places of religion (next to hindu temples and buddhist monasteries there is also the birthplace of Siddharta Gautamas, Lumbini, in Nepal). Pashupatinath, a complex with more than 500 temples and buildings at the Bagmati river to honor Shiva and UNESCO world heritage site, is the oldest temple of Kathmandu and today the biggest. The most inner part is forbidden for Westerners, but apart from that there is so much to see with exciting architecture and vivid religion. During Shivratri in the spring there is a lot going on. At hte river the dead bodies are burned – it has a similar importance as Varanasi. Tibetan refugees enlarge the buddhist variety in Nepal. Next to simple sightseeing we can also arrange stays with yoga, meditation etc. Of course, religions also provide for a variety of rituals and festivities – perhaps some of these will fall within your travel time?

85% of the Nepalis live in villages (with a strong tendency to rural depopulation) – a reason to get to know more about this life. Nothing easier than that: all trekking routes are passing villages and even who is not interested in trekking gets good opportunities with overnight-trips from Kathmandu for a village-stay as for example in Nagarkot or Bandipur. The villages have their own rules of living together. With some time, open mind and talks one can get to know a lot.

For women living in Nepal life is hard i some aspects. In this patriarchic system they have fewer rights but more duties as men. Menstruation in particular is fraught with stigma and rules, especially in remote areas. However there are also lots of examples for strong, happy and willful women. What about getting more to know? As woman doing a special female-based tour? barriers of language and structures of work give less opportunities in ordinary tourism to get to know the women better. We enable you good contacts, visits of women projects and a wonderful time together. And for sure we also can offer a female guide!

The hilly to steep landscape with few cars offers wonderful conditions for interesting MTB tours. Besides shorter one-day to multi-day tours from Kathmandu in the Nagarjuna area, you could even do the Annapurna circumnavigation on two wheels! There are good MTBs available for hire.

Except arriving in Nepal overland from India, for all other travellers Kathmandu with the only international airport is the starting point for a Nepal-journey. Kathmandu being a mega city with above 1 Mio. inhabitants is increasing daily due to migration. Located on 1.300 m in a basin Kathmandu covers a distance of 30 km. Next to sightseeing of Pashupatinath, Swayambunath and Bodnath same as Durbar Square you best get lost in the small alleys of the old town. Here is a lively hustle, the courtyards (Bahals) are on the contrary oasis of silence. You don’t have to extend your stay in Kathmandu, but an insight into the biggest city of Nepal on contrast to the rural areas is definitely fascinating.

Best choice of moving in Nepal are the feet! But to get from A to B there are other methods of locomotion for disposal: cars, buses or planes. The Nepalese mostly take the bus – so you should also experience this! There are not only humans transported, but also animals and lots of luggage. While being rocked slowly through the mountains, there is time for contacts and observations of the daily life of the Nepalis.